The Very Hungry Caterpillar and Other Summer Fun

Do you have a caterpillar lover in your family?? My children love all things animals and insects. They have since they were very young. Their excitement for living creatures brings me back to when I was little. I used to dig in the dirt to find ‘Sammies’, the name I gave to all earth worms. I loved them then and still do. I’ve even been known to transplant a few earth worms to a new location in my yard where I am trying to grow new vegetation.

So,when I saw a deal on one of the online sites for Painted Lady Caterpillars, I ordered right away. Those caterpillars sparked a whole set of fun art, science, reading and writing activities. 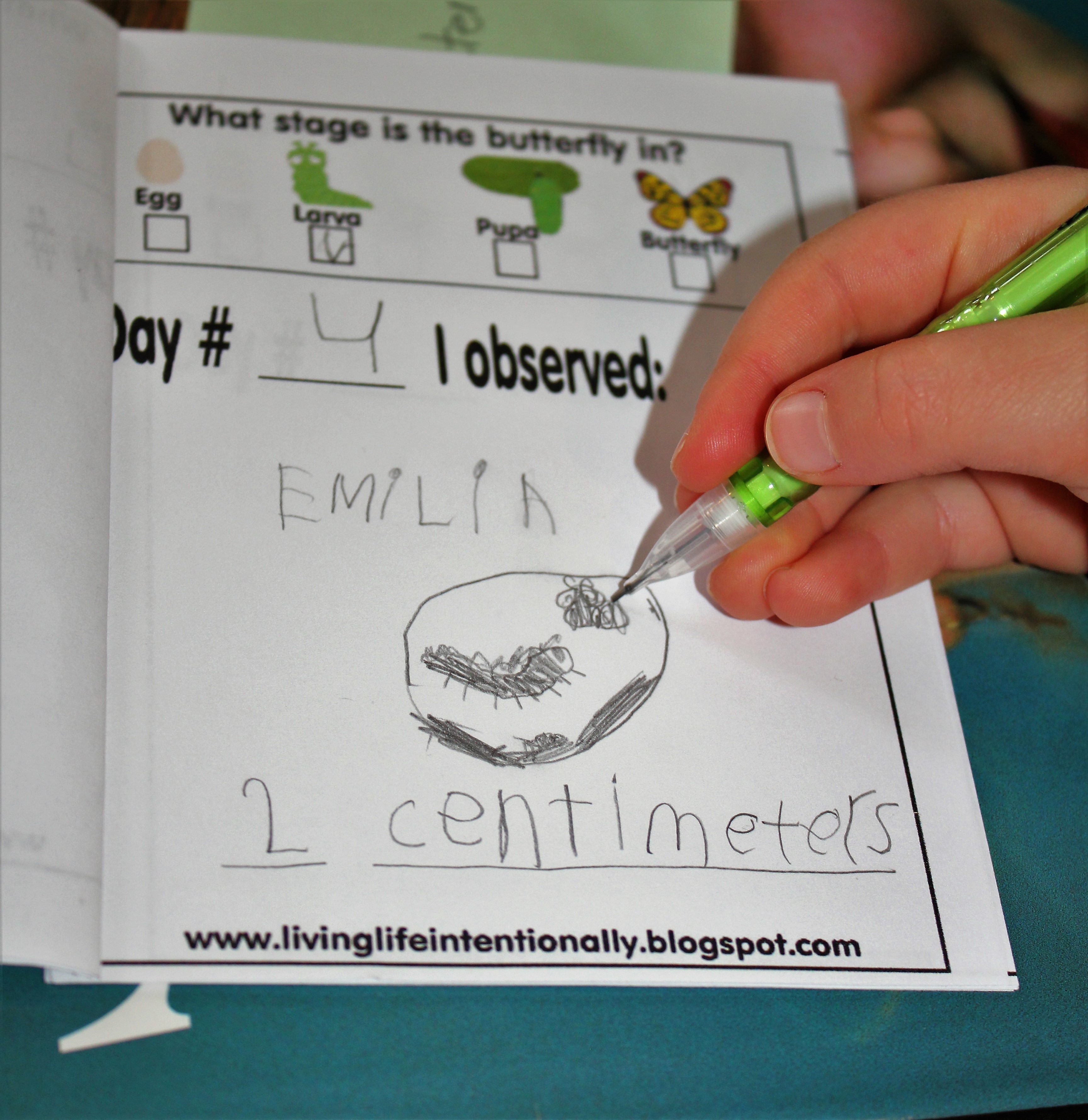 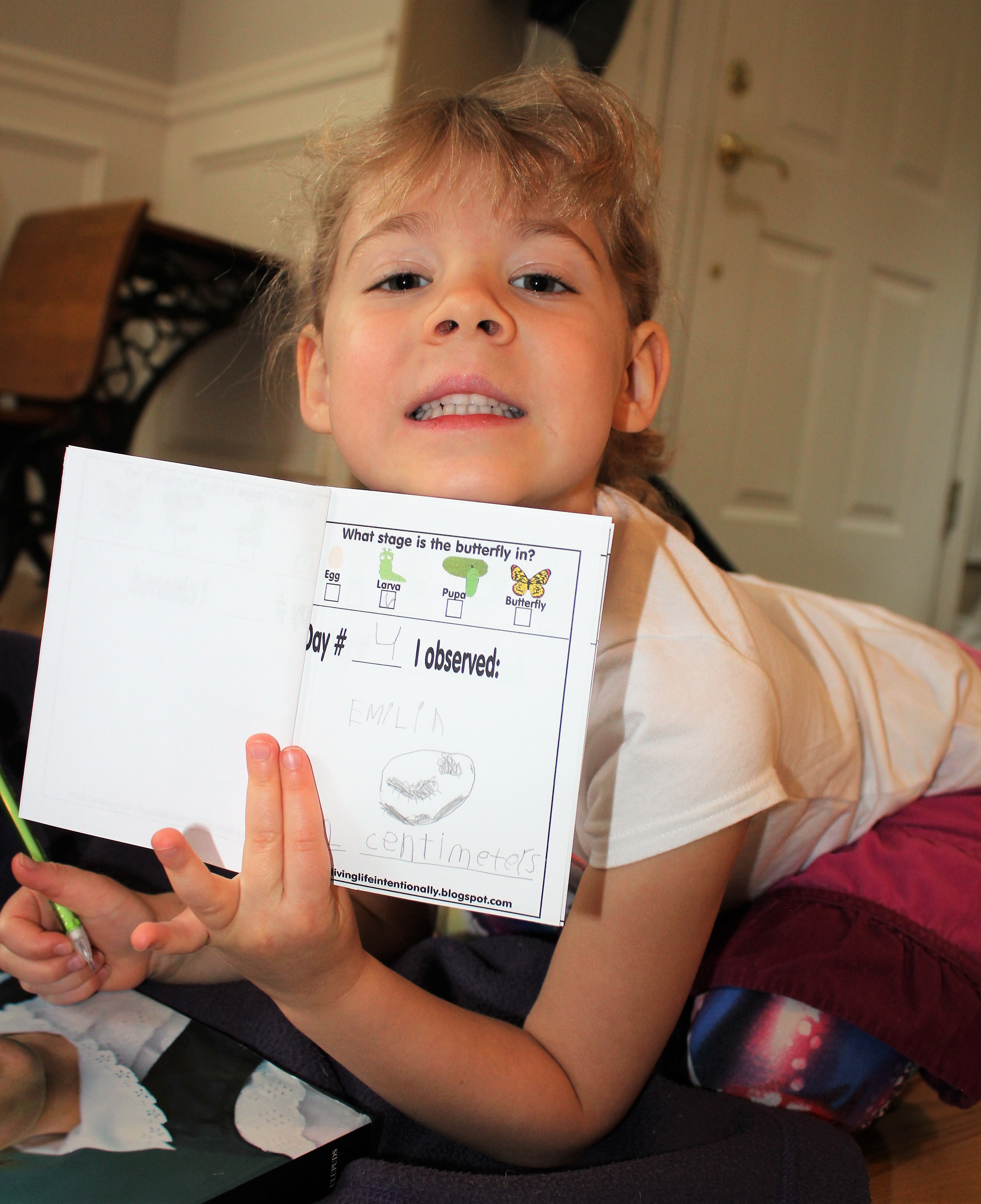 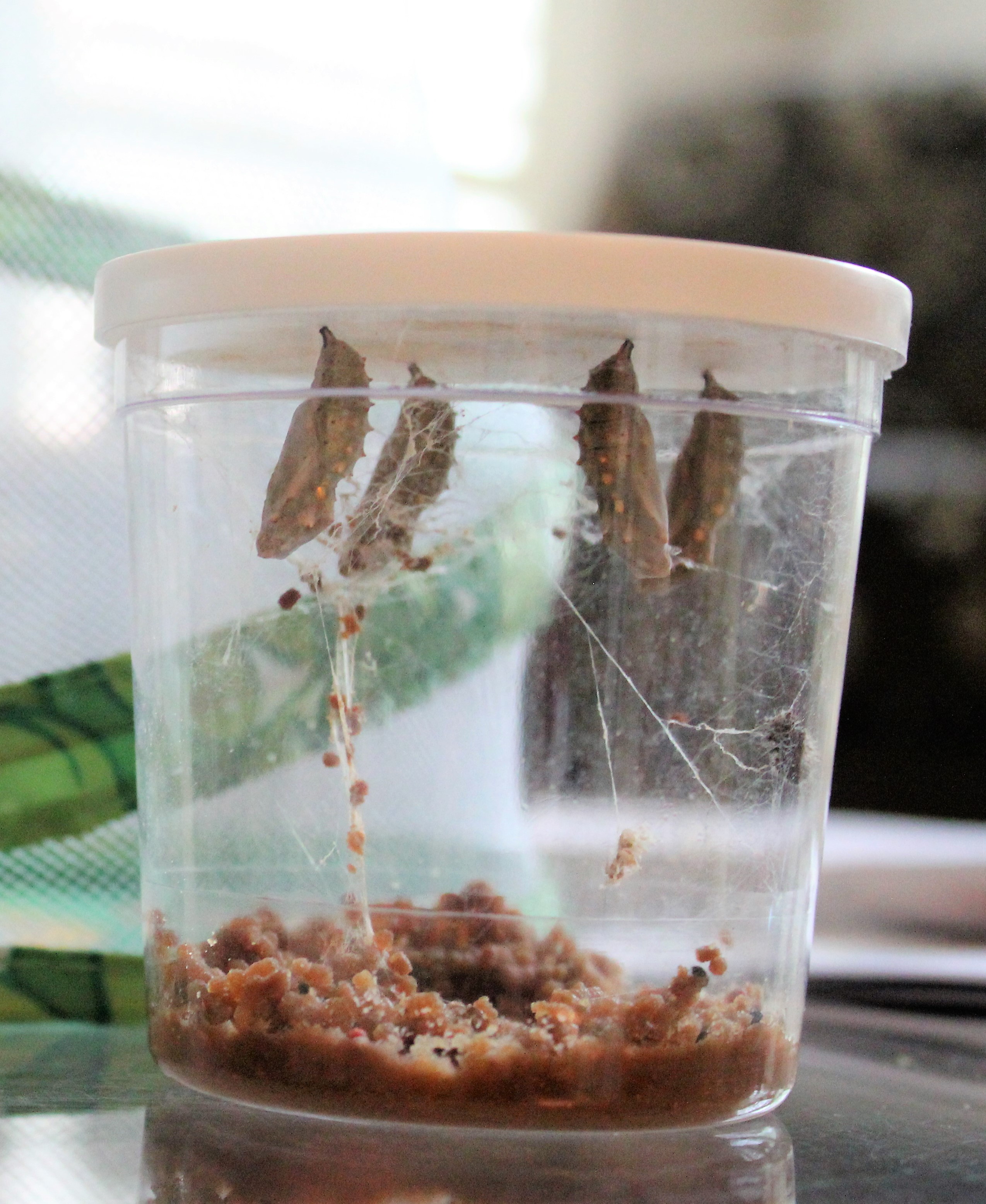 First, we did a lot of observing. We examined how they moved, how much they grew over time and how much of their food kept disappearing. I found this great resource to help my little ones record their observations of our caterpillars. You can find this life-cycle book at http://www.123homeschool4me.com/2012/08/hatching-butterflies-with-free-printable.html. 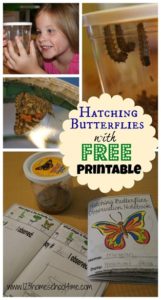 We even did a special ‘release’ celebration after the caterpillars emerged from the chrysalises. It was definitely worth the work and time involved! 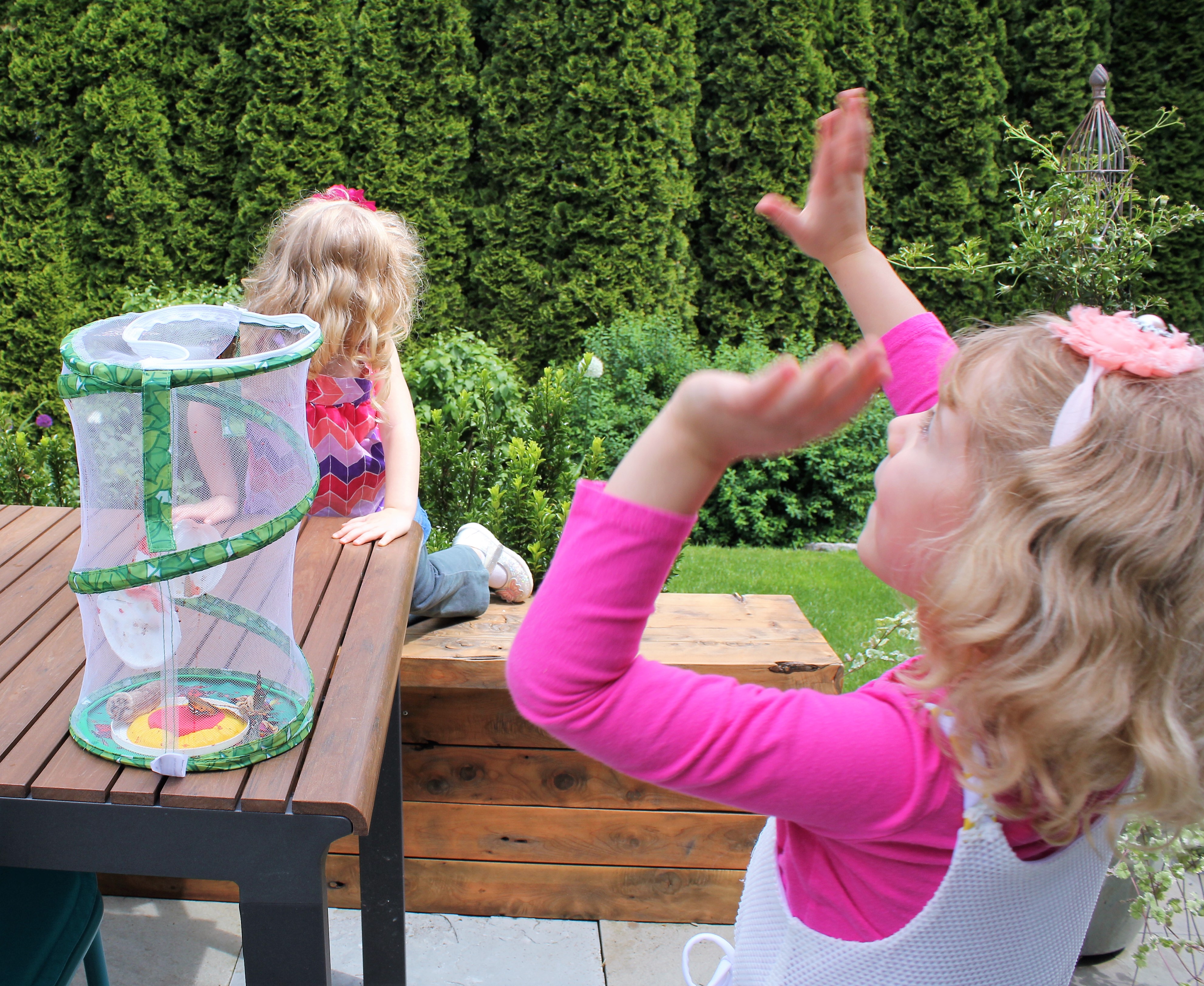 To support the exploration, we read lots of books about caterpillars and butterflies. I had to read Eric Carle’s, The Very Hungry Caterpillar. You just can’t talk about caterpillars to three and five year olds without the addition of the most hungry one!! But, we also explored several non-fiction books to help teach us more about the life-cycle, habitat, and characteristics of butterflies. These two are excellent options.

Are You a Butterfly? by Judy Allen and From Caterpillar to Butterfly by Deborah Heiligman 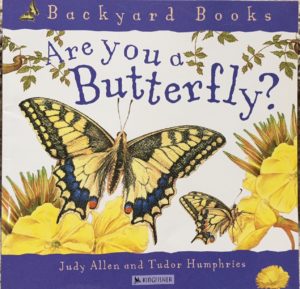 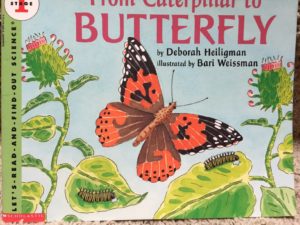 Next, we made balloon painted caterpillars like Eric Carle’s caterpillar. 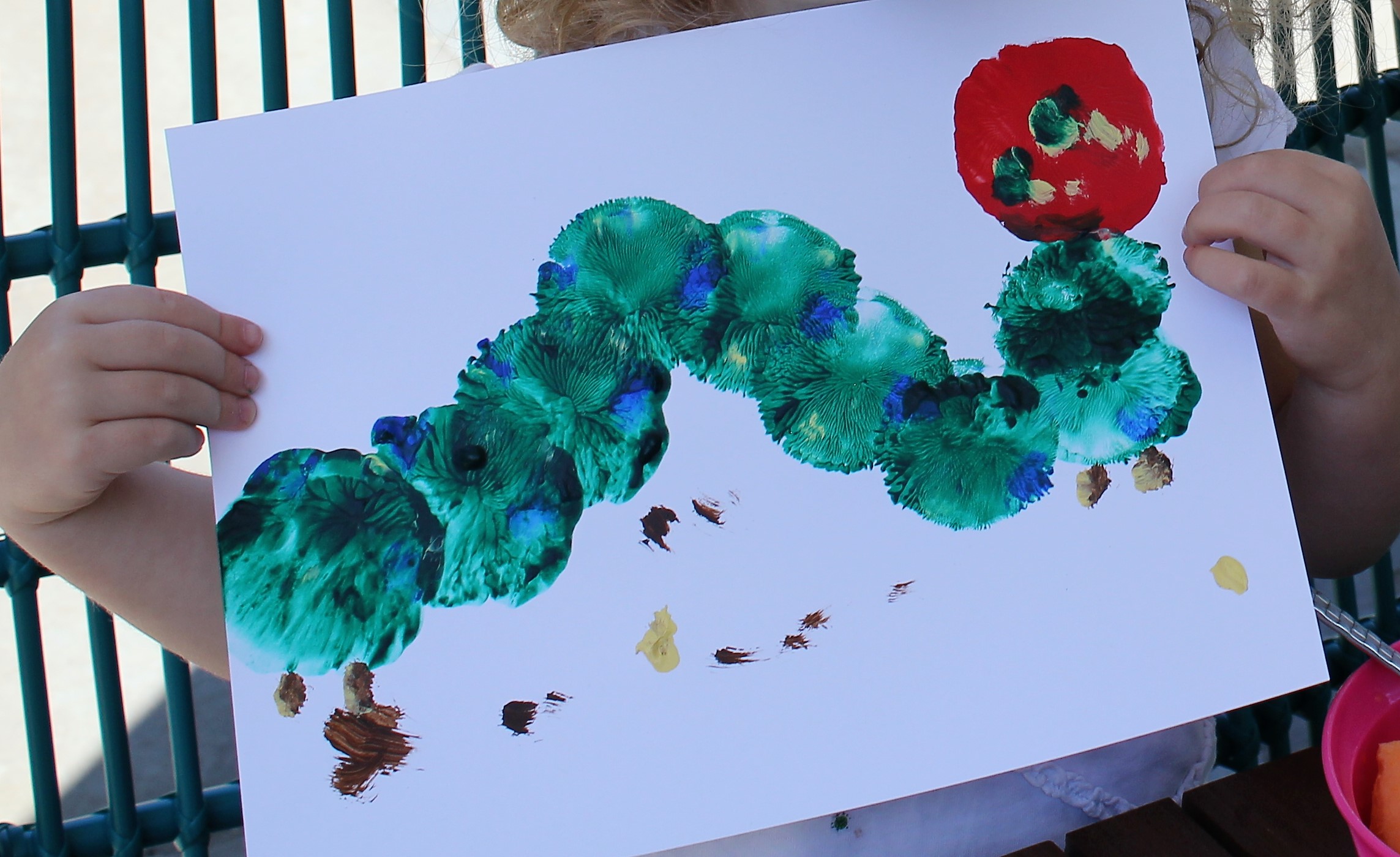 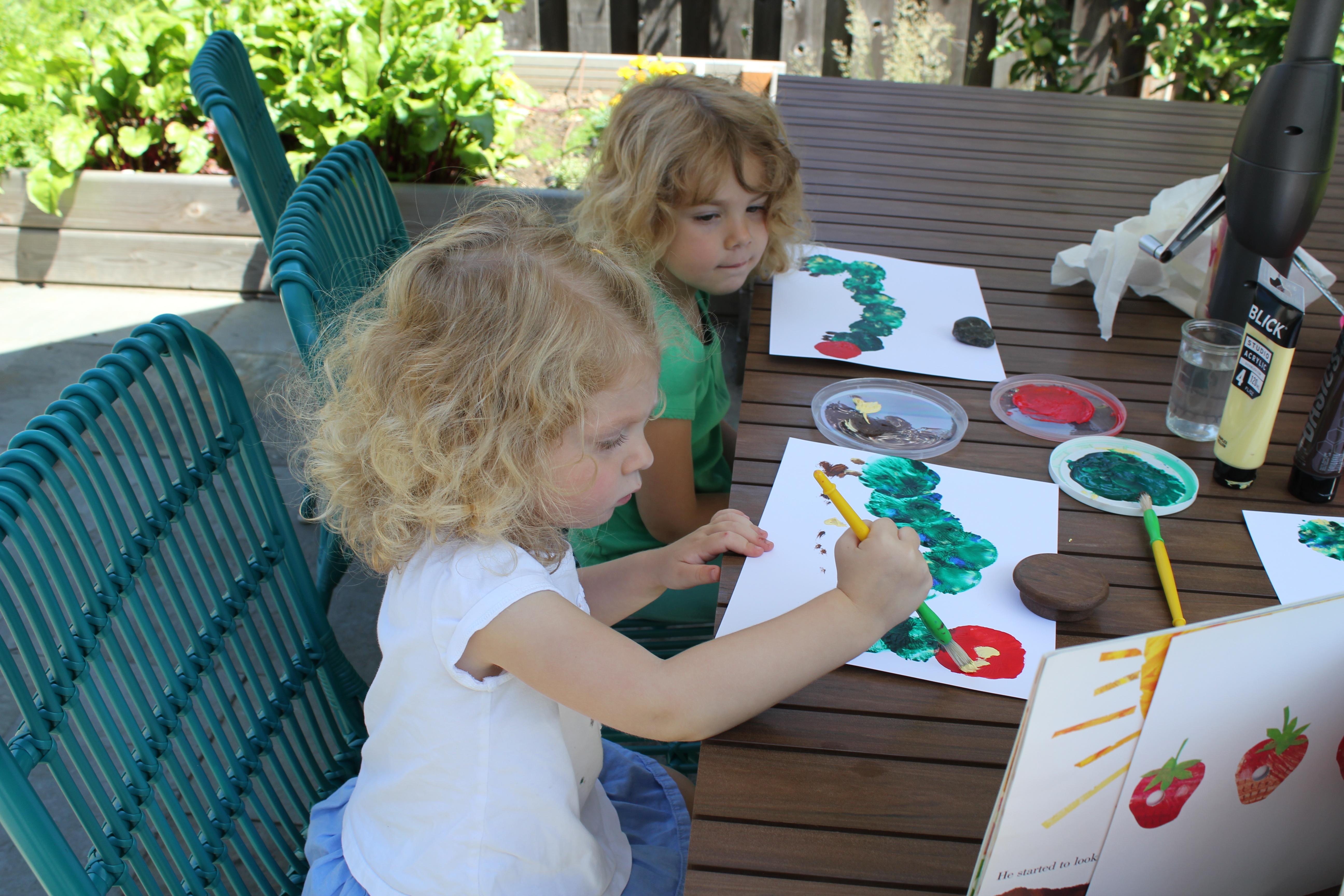 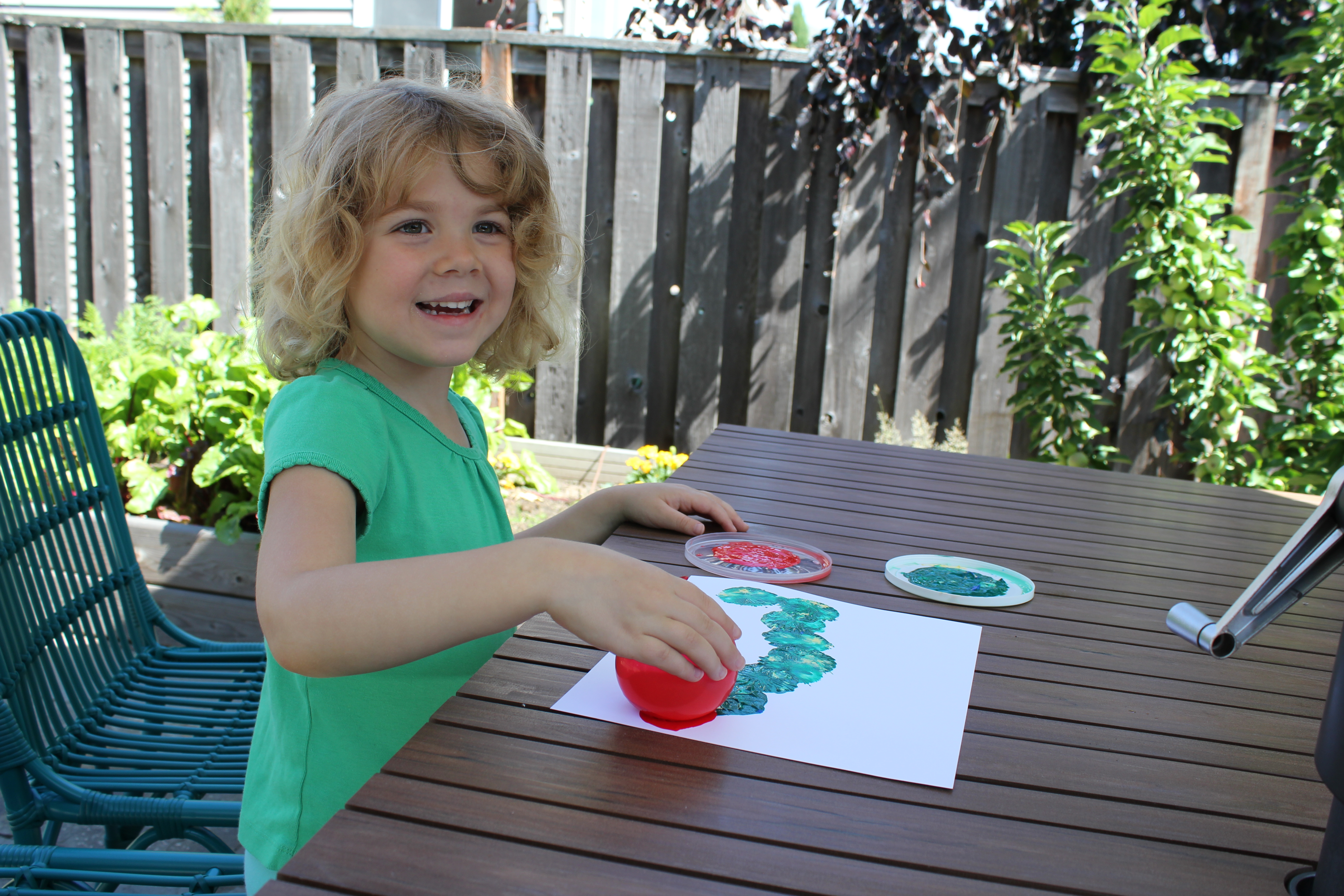 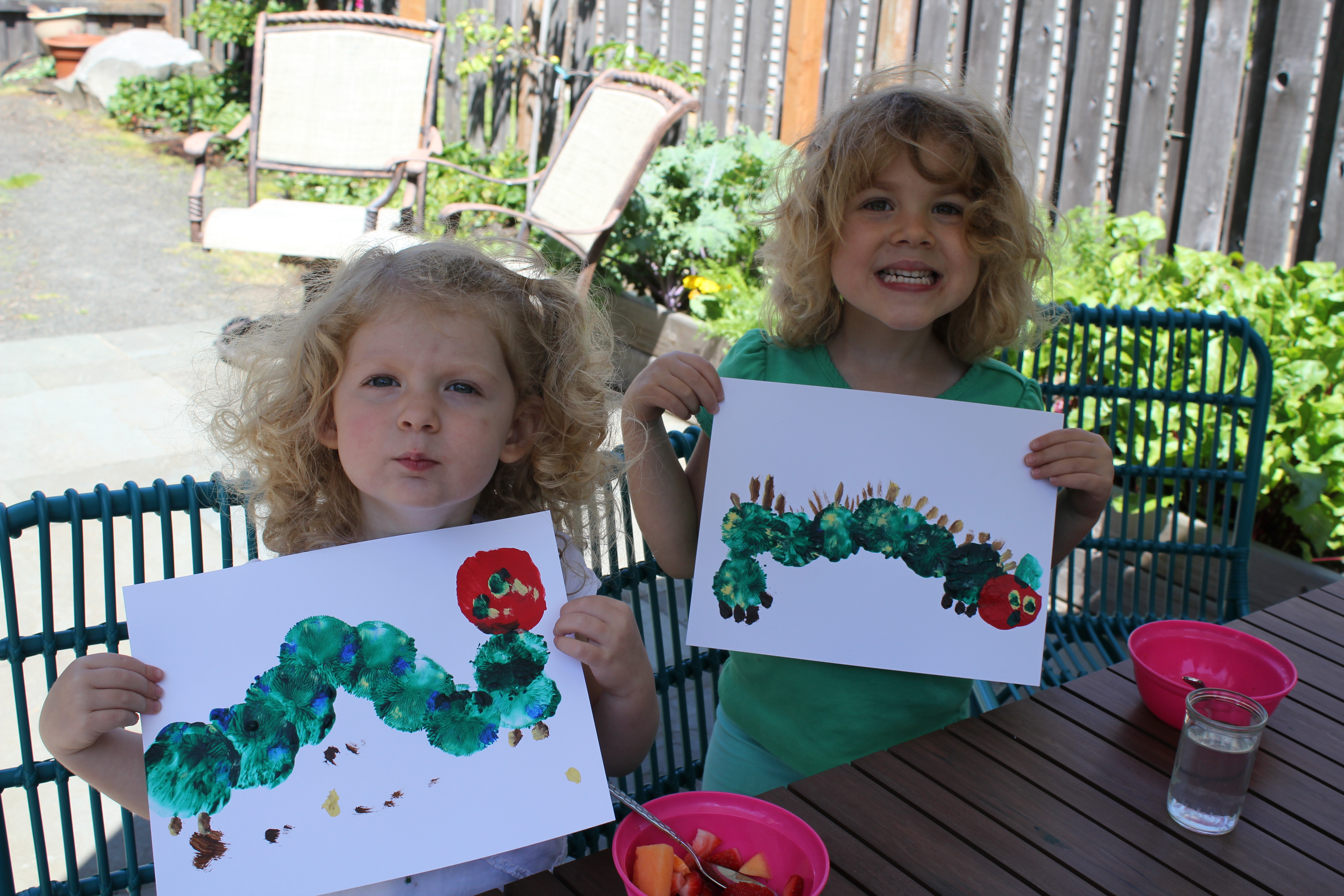 Start with a small balloon only slightly blown up. Put a few drops of paint in a paint tray. We chose green, yellow, blue, and turquoise acrylic paint. Smooch the balloon down into the center of your paint tray to make a circle of paint. Then, start stamping your paper with your circles creating a train of circles that roll to create a moving caterpillar. Use a different color paint to make the head. We wanted ours to look like Eric Carle’s caterpillar so we made a red head. Then use a paintbrush to create the antennae, short legs, and eyes.  This is fun and easy enough for a three year old! 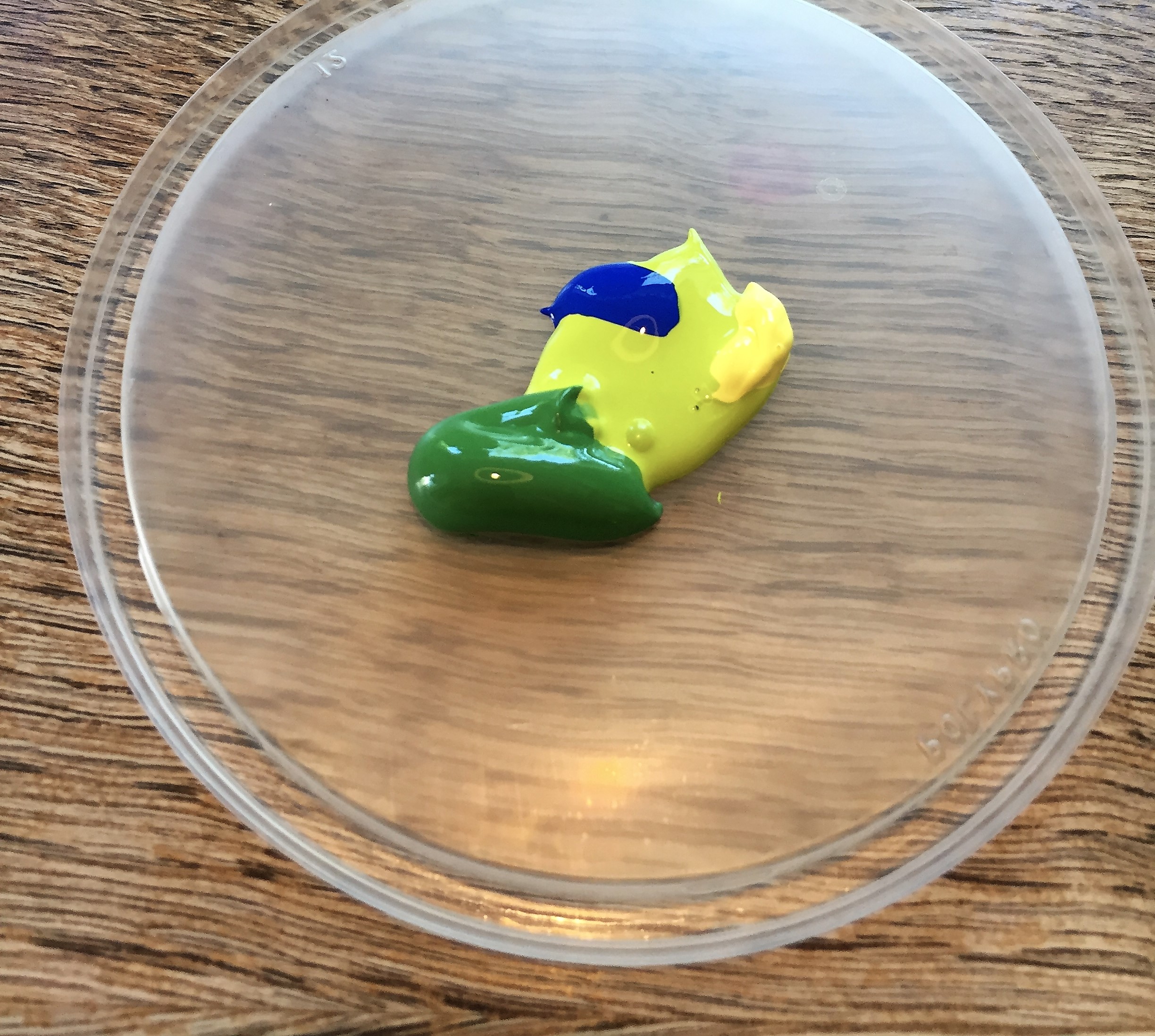 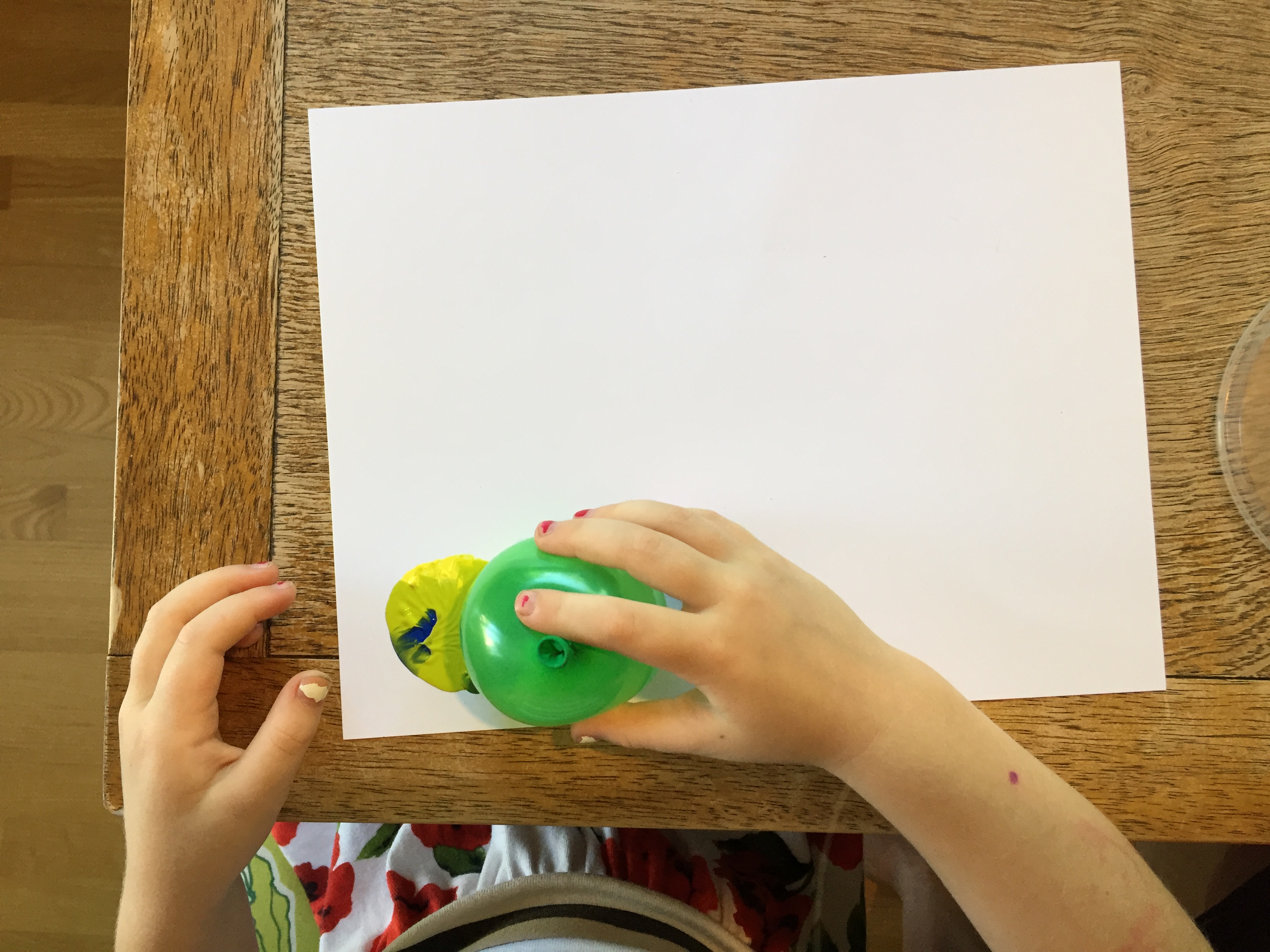 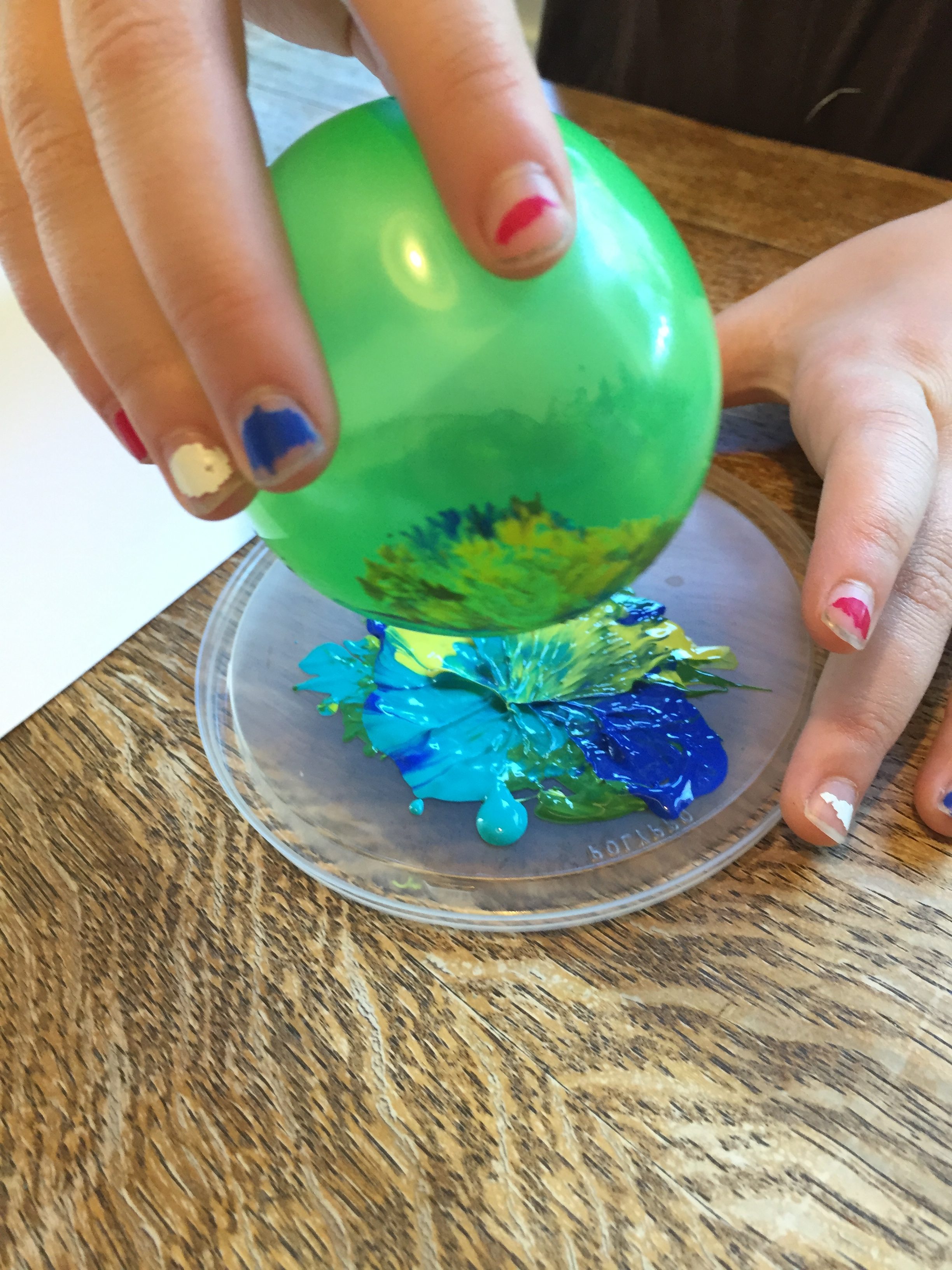 At the time, my girls were too young to do the writing work I really wanted to do. So, I pulled out their original artwork recently. My youngest decided that she wanted to write her own caterpillar book. She modeled it after Eric Carle’s book with her own caterpillar eating all of the foods that my daughter loves. This was really fun and although it required a bit of time, she is so proud of her work!

We simply took several pages of blank 11 x 14 paper and folded them to create the flip book portion.  We started with a rough draft of each page, but when she decided that she wanted to have the text typed, I knew that would take entirely too long. So, I had her dictate her story to me. I typed what would go on each page. Then she cut the text out to add to her illustrations. The only part that didn’t work well is the hole that the caterpillar would make in each food item. That was a challenge for me. 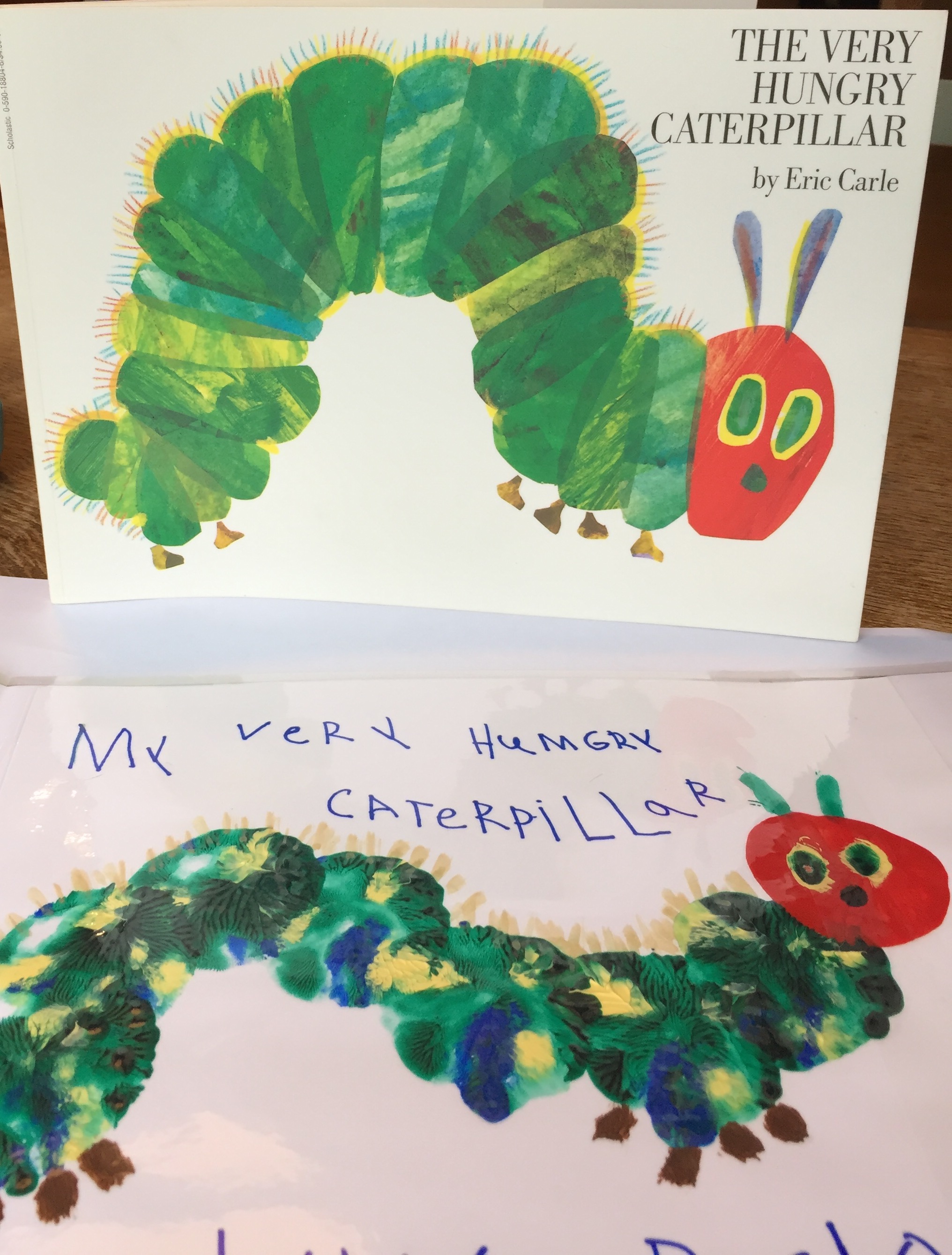 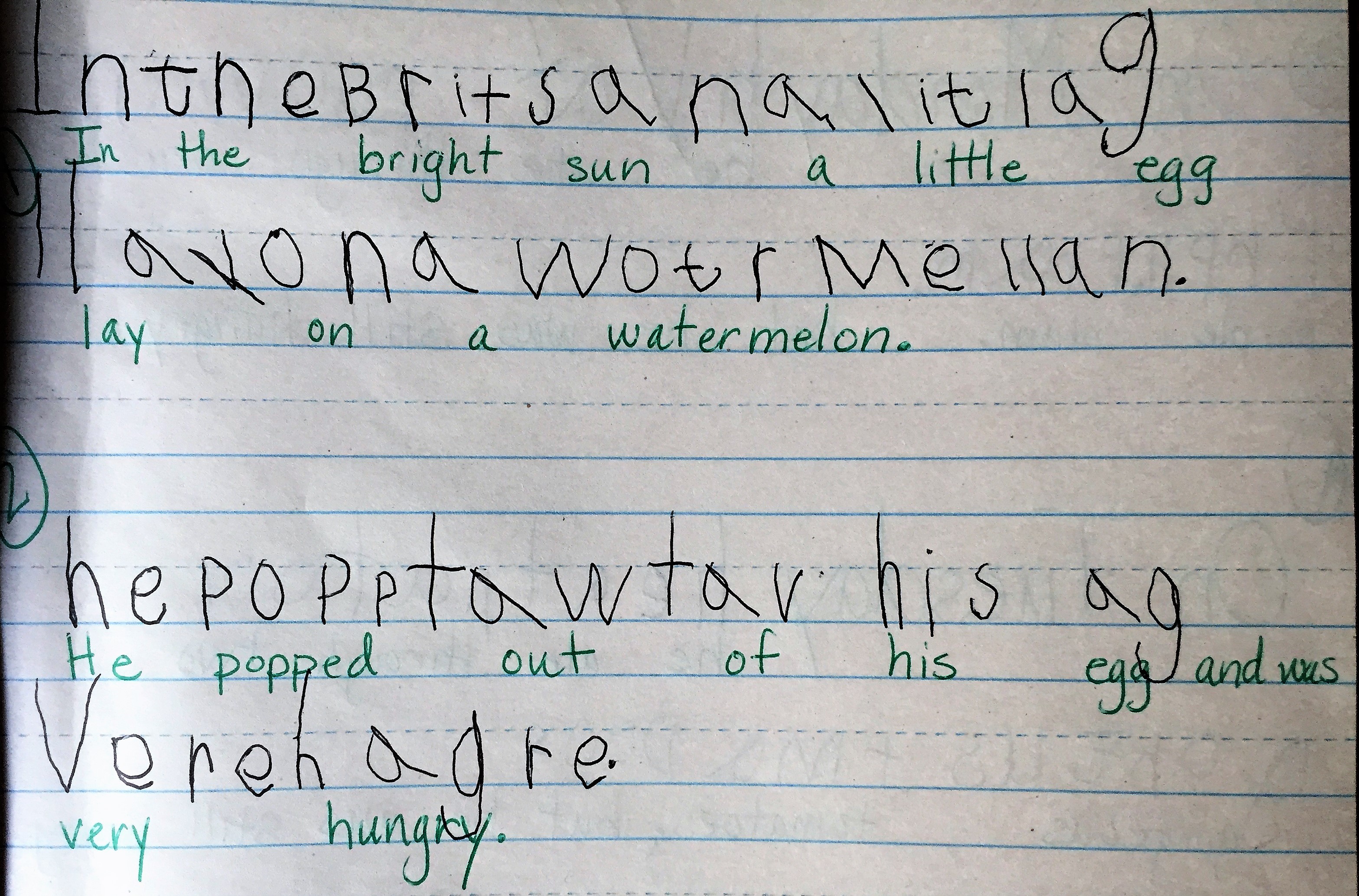 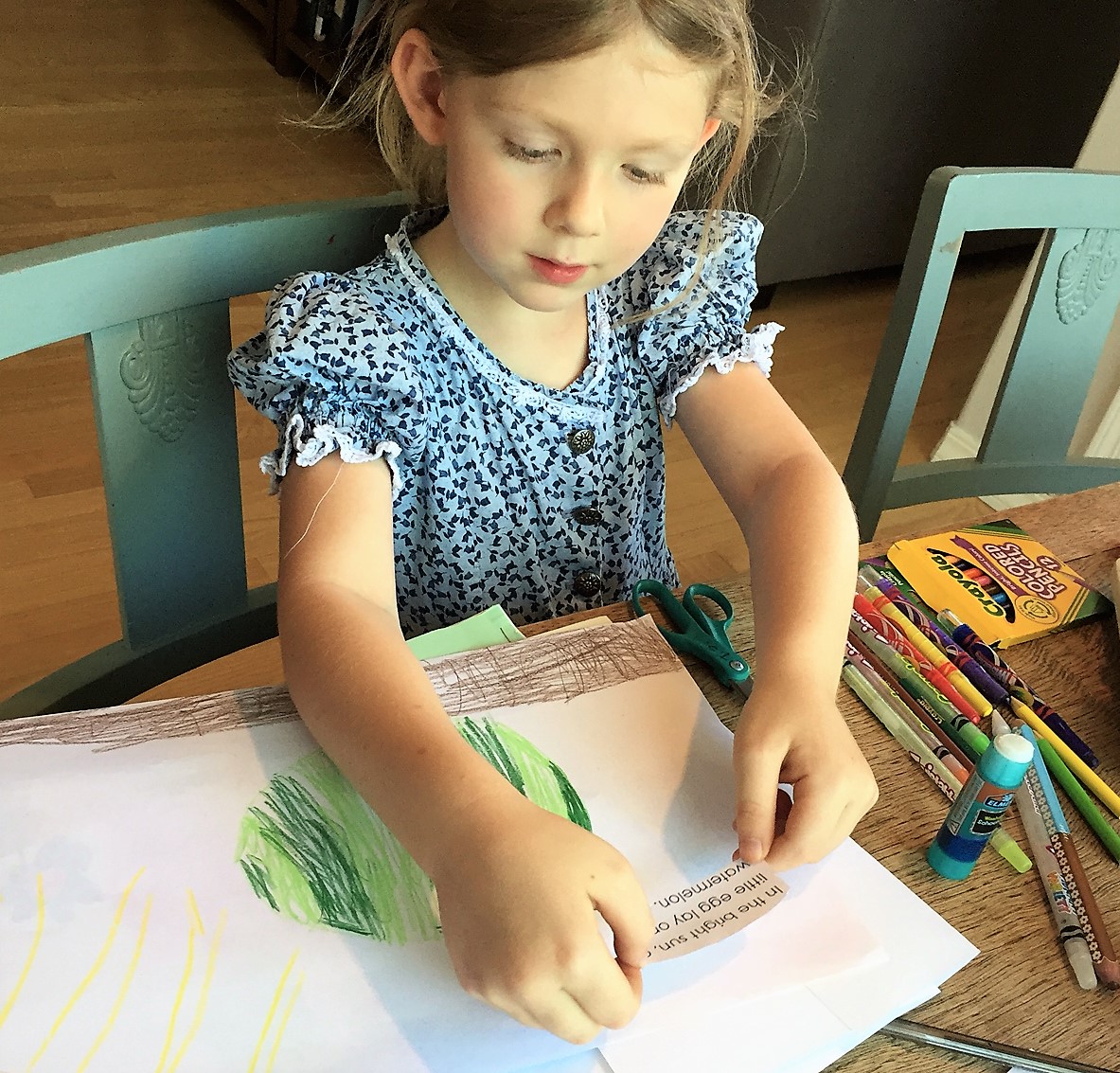 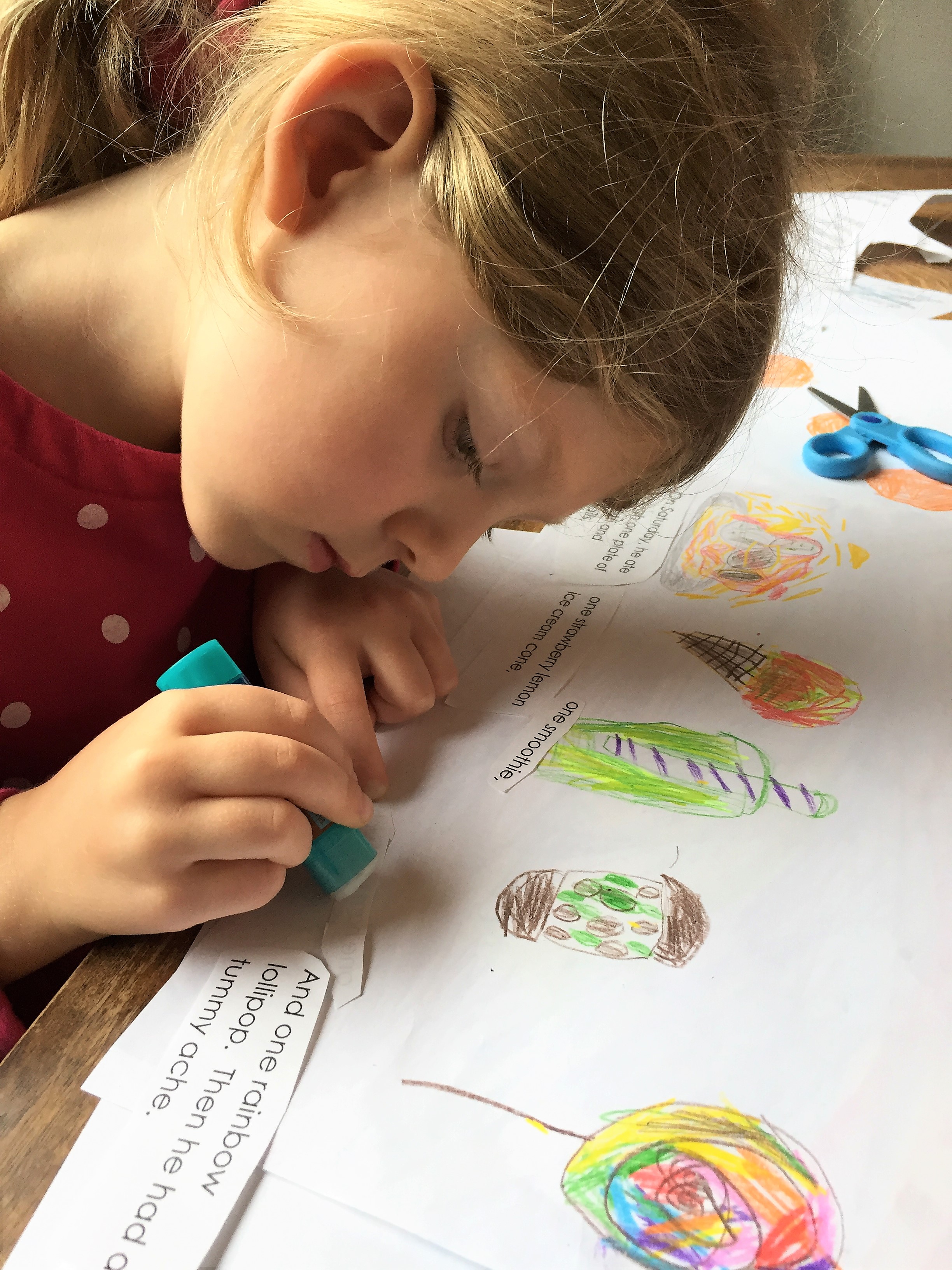 Here’s her entire story. As you can see, the eaten holes are not completed yet. The hole punch did not work so I had to use an eyelet tool.

In the bright sun, a little egg lay on a watermelon.

He popped out of his egg and was very hungry.

On Monday, he ate through one purple plum, but he was still hungry.

On Tuesday, he ate through two gorgeous tomatoes, but he was still hungry.

On Wednesday, he ate through three bright yellow bananas, but he was still hungry.

On Thursday, he ate through four sweet watermelons, but he was still hungry.

On Friday, he ate through give juicy peaches, but he was still hungry.

On Saturday, he ate through one plate of spaghetti and meatballs, one strawberry lemon ice cream cone, one smoothie, one ham sandwich, and one rainbow lollipop. Then he had a tummy ache.

On Sunday, he walked to a green leaf and rested. He had a happy dream of becoming a butterfly.

He made a chrysalis around himself and hung from a tree branch.

A few days later, he popped out of the chrysalis and became a monarch butterfly. He flew and found his new home. 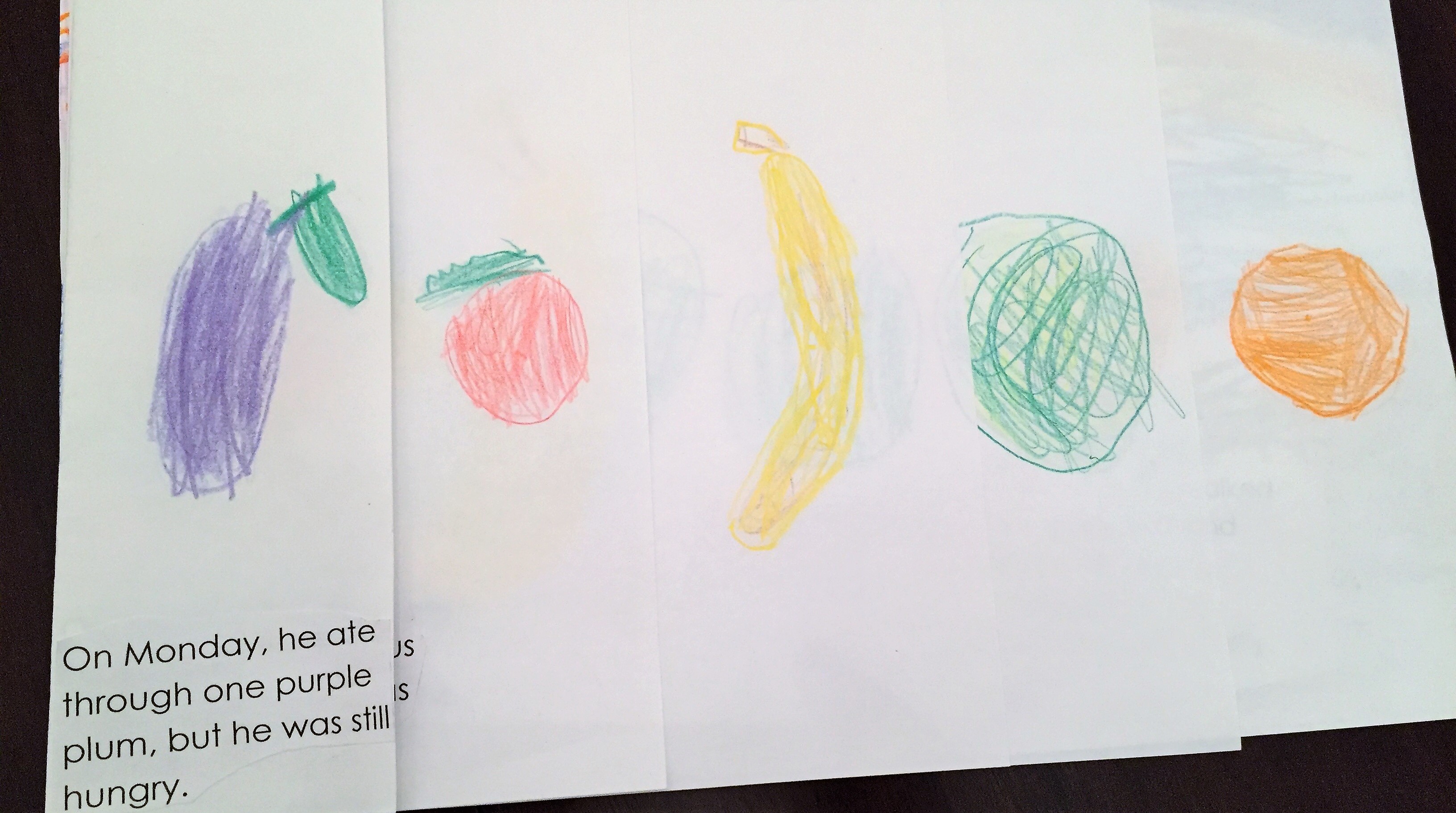 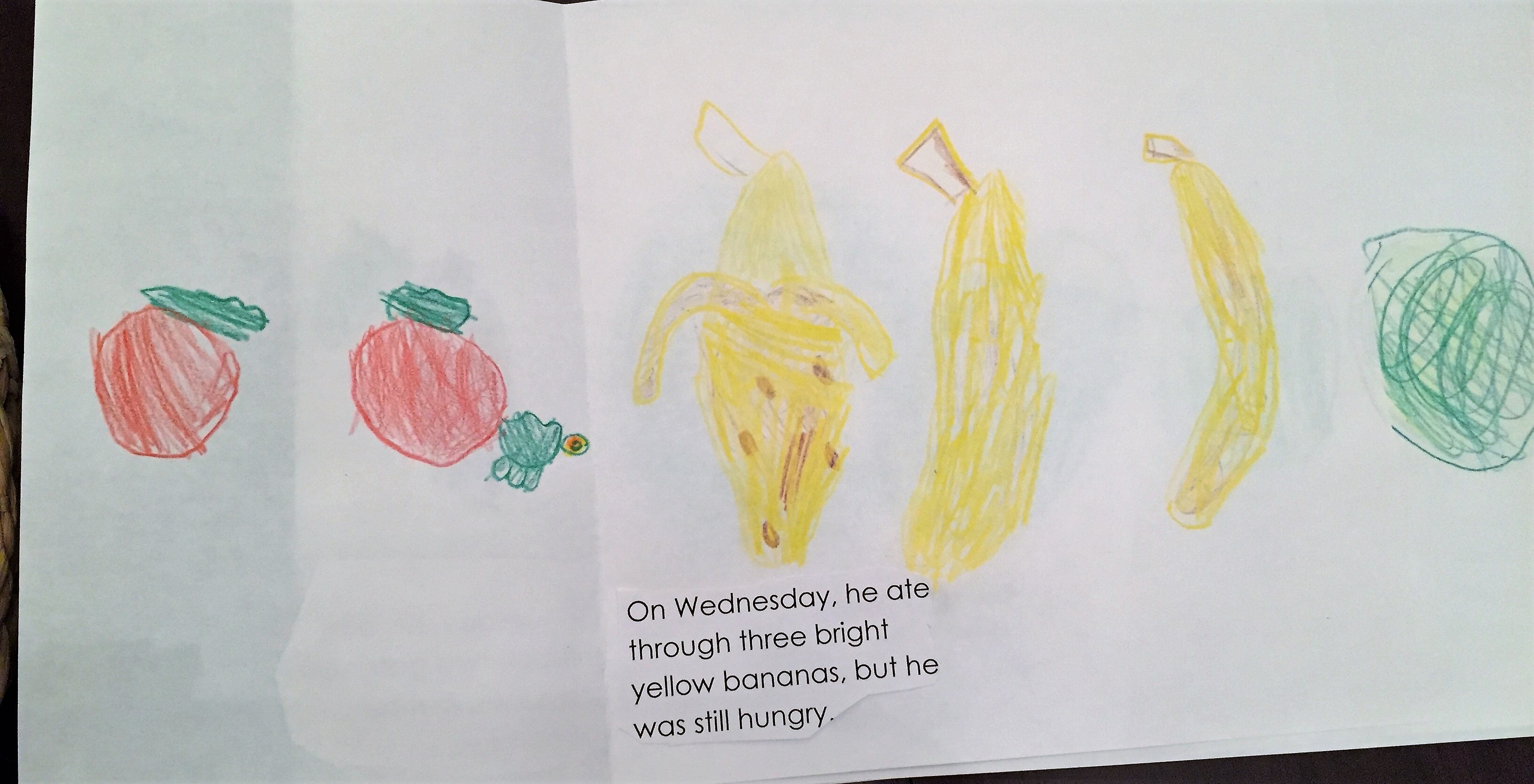 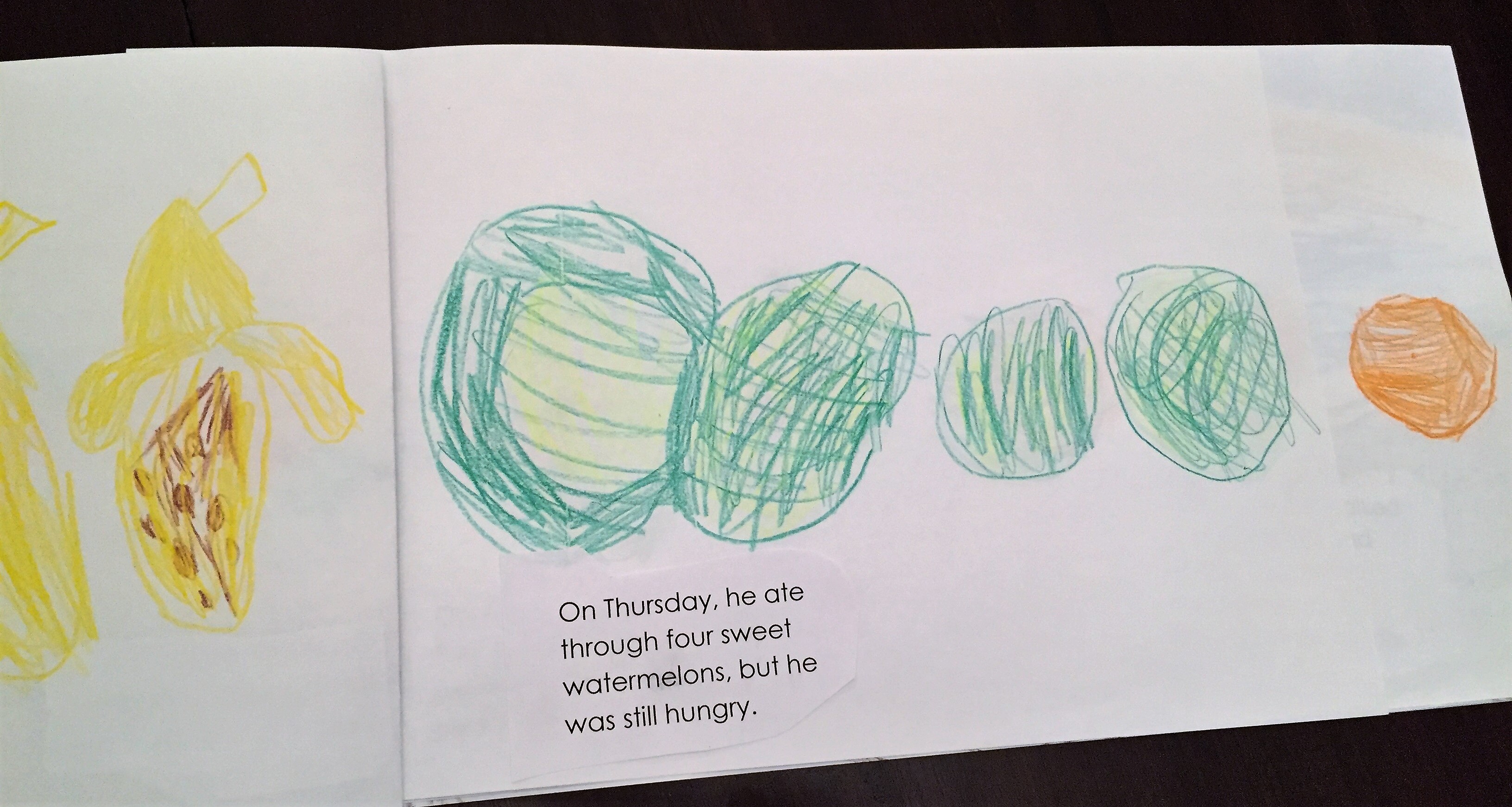 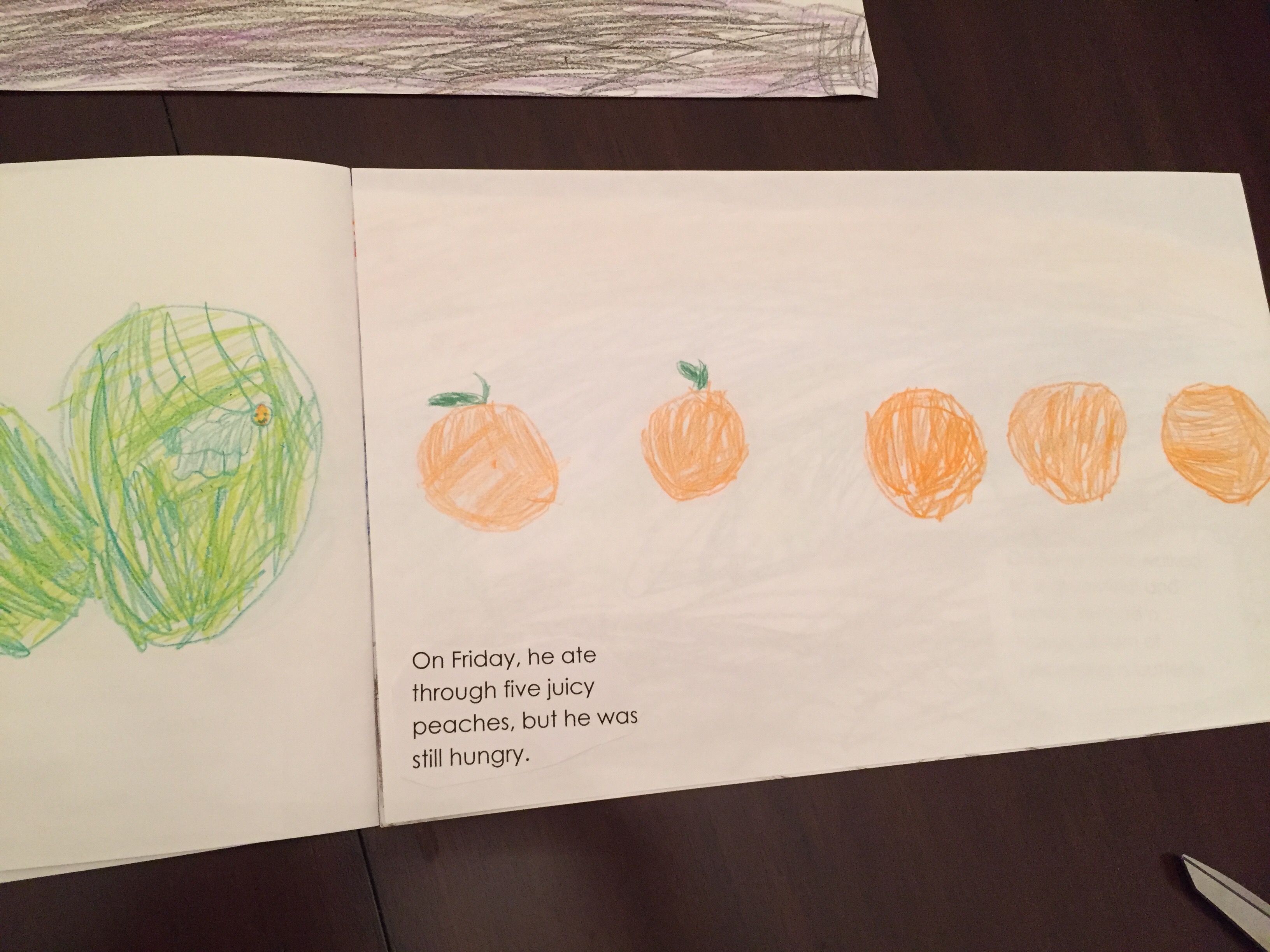 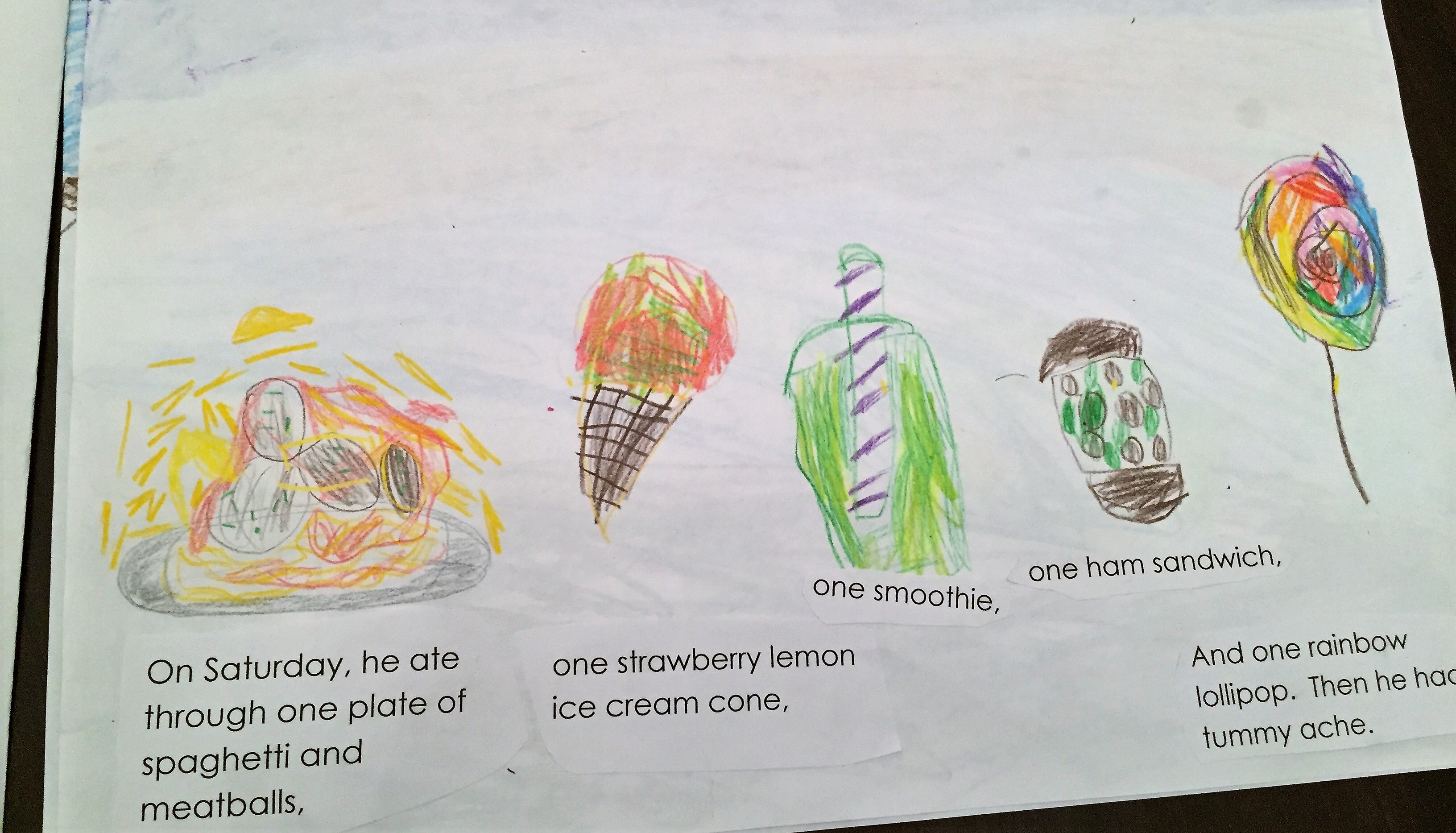 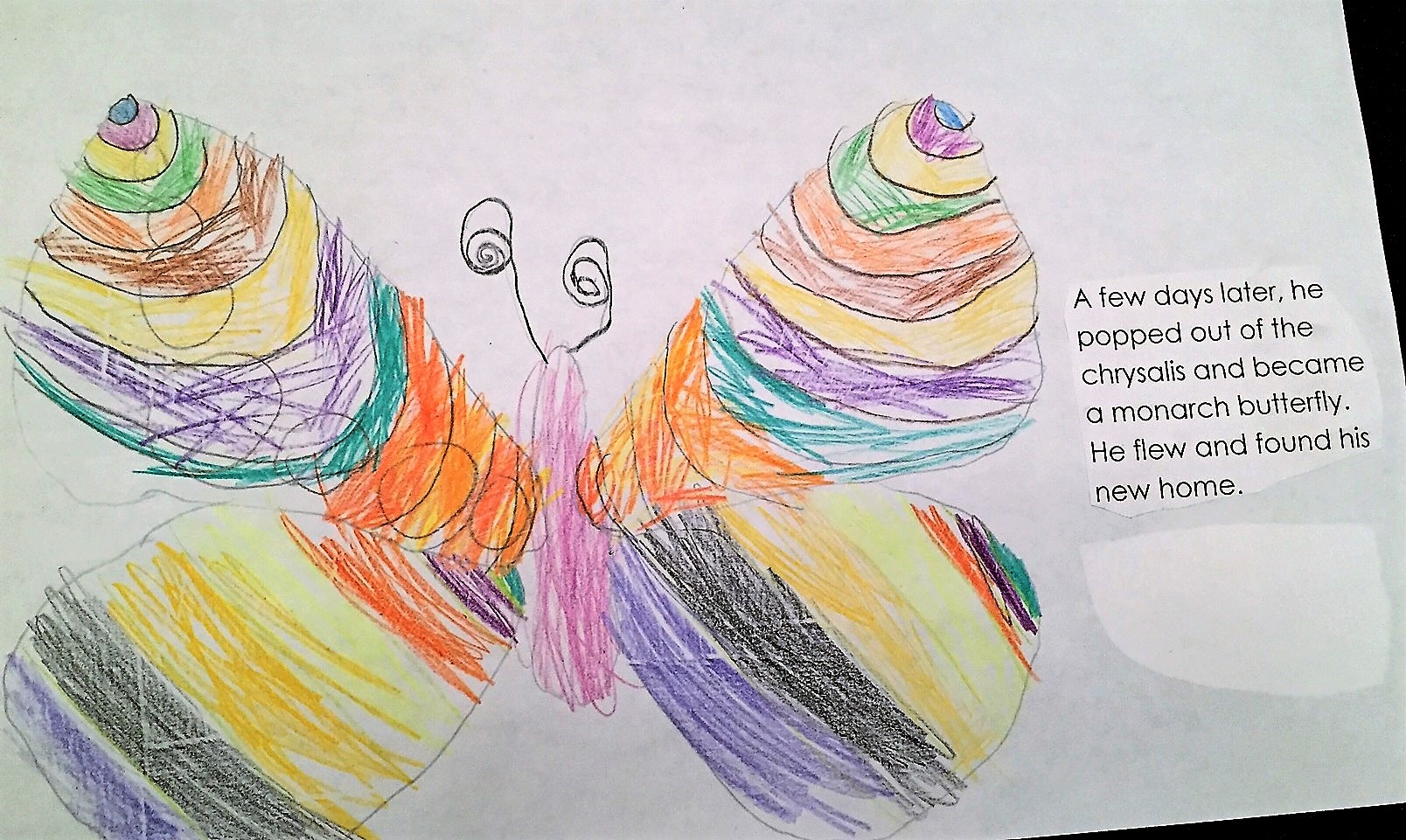 Another extension is to examine Eric Carle’s book to determine the beginning, middle and end of the story. My seven year old chose this activity. Download the two pdfs below. Simply copy the pages back to back to make the book. Then fold in half like a ‘hot-dog’ and cut the lines to separate the three parts. 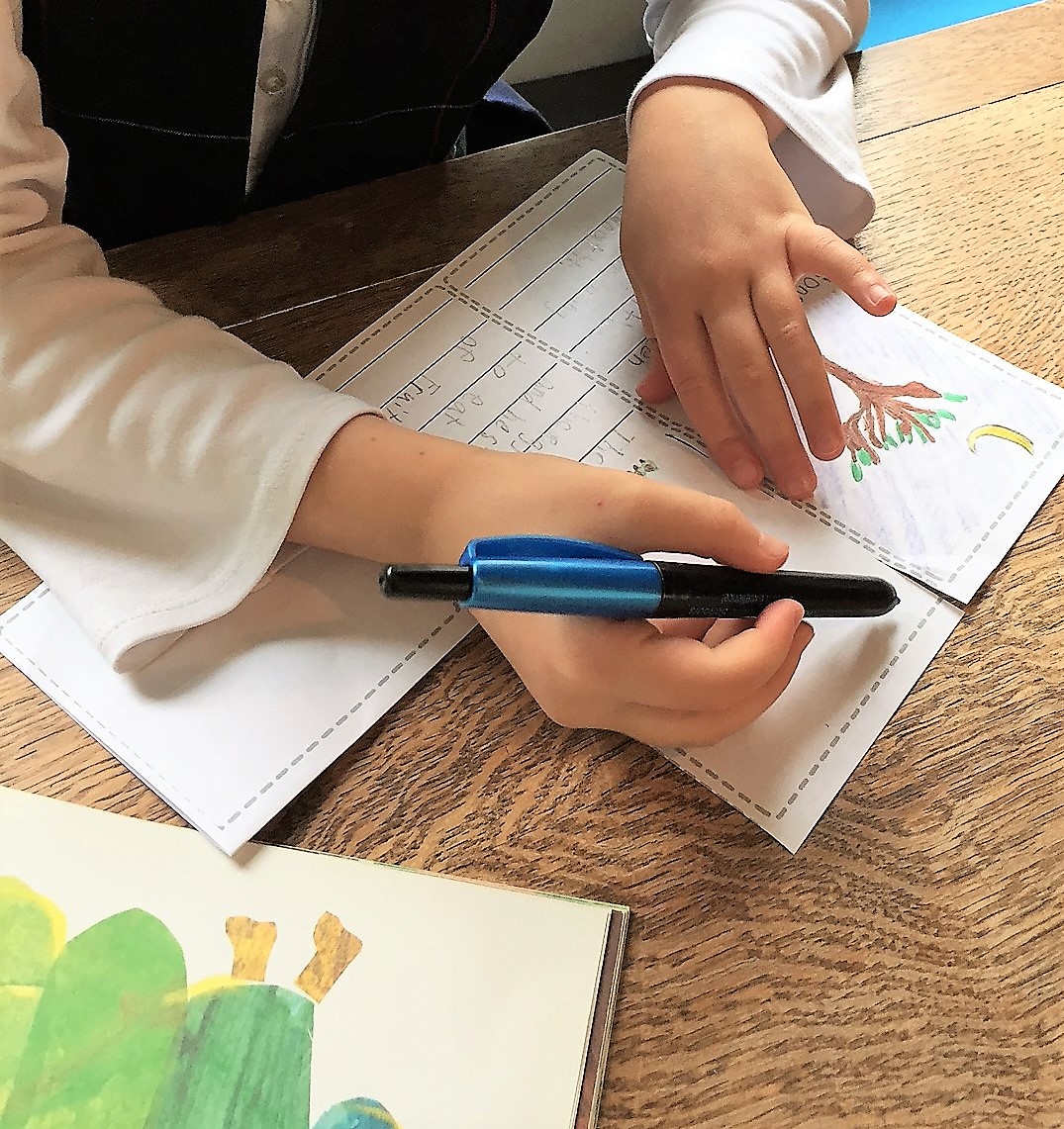 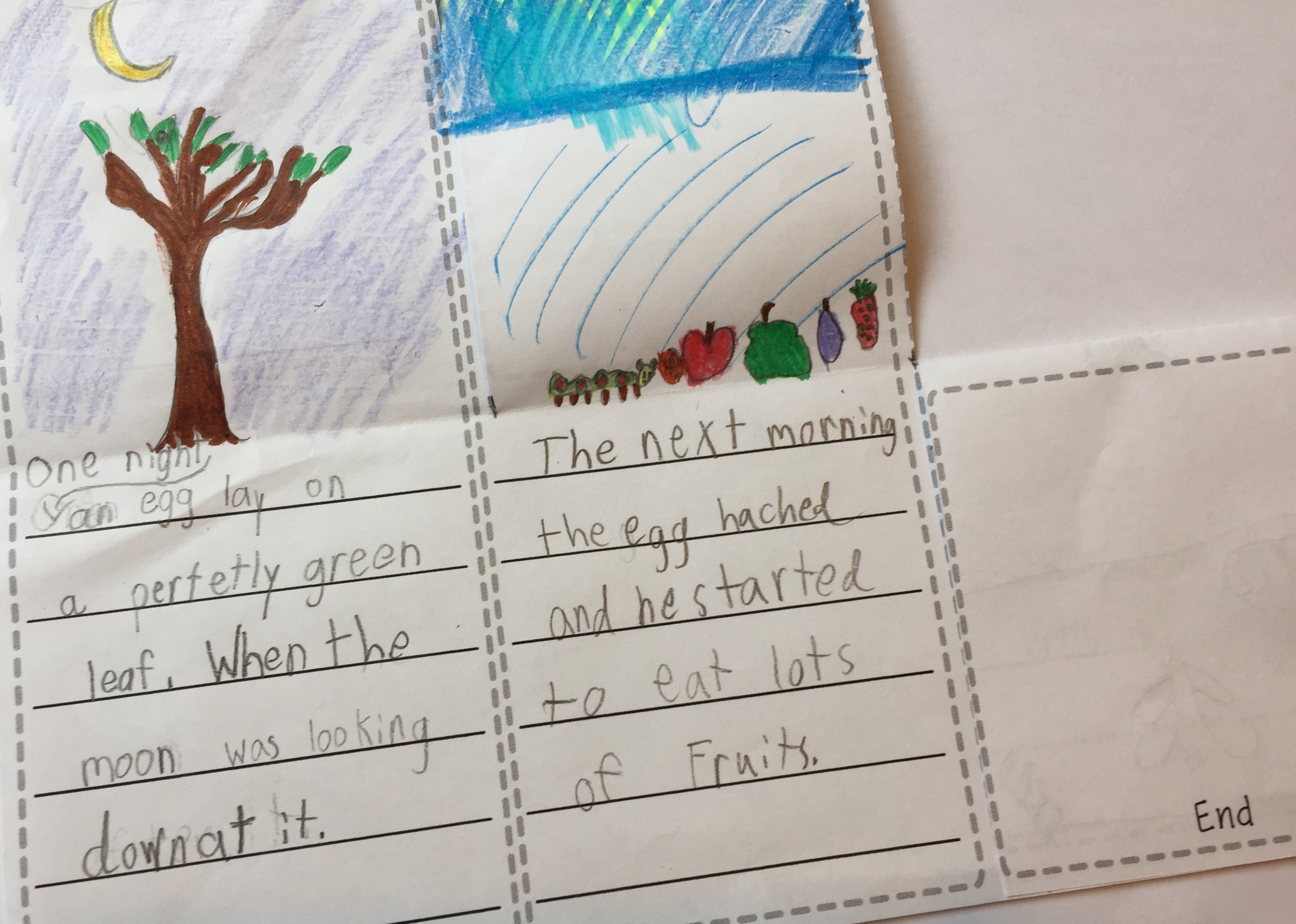 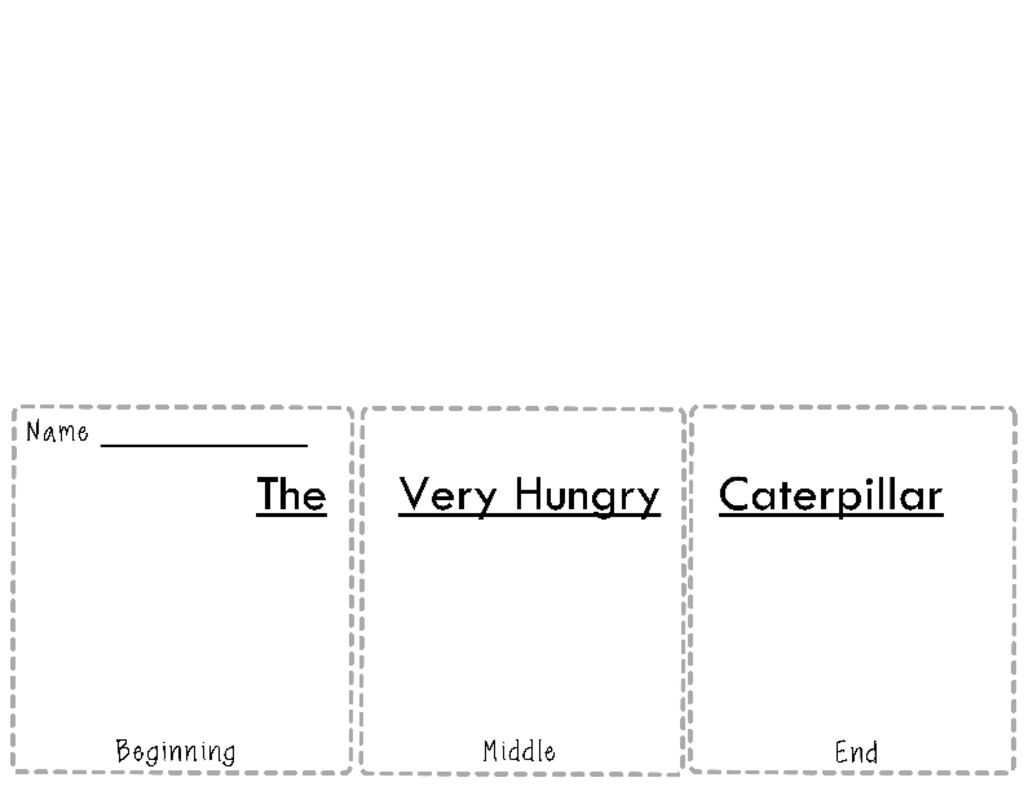